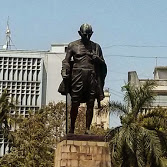 Look closer on the head and the chest of the great leader, whom we have termed as ‘father of the nation.’ Appalling, is actually understating. I’m even ashamed to call myself an Indian.

This statue stands alone in a garden next to the ‘power seat’ of our state, called Mantralaya. The administrative heads, chief minister and all ministers sit, rather tightly on their backsides.

I always wonder they spend millions of rupees, (now thousands and lakhs have no value), fight among each other to get land allotted for a plot where they build statues. All in the name of patriotism. Really my a*%. Firstly, it is  a shameless form of capturing public land, which otherwise would have been used by children and public, deprived of gardens and maidans. I remember how as kids my father would bring us to these gardens-1. at Colaba, which thanks to the residents they’ve fought hard to retain. The other BIG garden was adjacent to Mantralay. Interestingly, one entrance to the state administrative building is still called as ‘garden gate,’ because like most things in our part of the country, once upon a time, there did exist a lovely garden. We all would come and play and we had sunday-sunday friends as kids. There was a mud pit where we could roll without being yelled at, tiled path along the garden which prevented us scatter-brained kids from trampling upon the plants. And yet another garden next to it, which was this. I don’t recollect the year when Gandhi’s statue was erected there. I’ve no problems to that, i have problems to the silly technical issues, like keeping it locked.
I’ve a HUGE grouse that they spend public money putting up statues and give NO thought to the maintenance and keeping it clean. I swear looking at it as I pass by everyday, it makes me want to up there on a ladder and scrub the statue. Birds droppings that aren’t cleaned except twice, or wait, may be max four times a year. The Republic Day, the martyrs day (Jan 30), the Independence Day and October 2, the birth day of Gandhiji. Rest of the time, he is a forgotten entity.

Then why do our leaders want to construct these statues? Leave aside the fact the politicians build them, which is a hangover of the British culture, we don’t deserve these luxuries; in fact the Shivaji Maharaj’s statue at Shivaji Park is in a pathetic condition. They not only forgot about this statue, but when they did remember, in 2010, to celebrate the 50 years of Maharashtra, the rascal Municipal and state officials, went and got this bronze statue of Shivaji painted to tar BLACK. If this is not pathetic, they went and painted the marble Flora Fountain into ivory white colour paint. They have lost their marbles!

The bronze metal has to shine brightly, instead they change the very colour to black and paint it. Now the officials will have to waste money to firstly scrub it, ensure it doesn’t get scraped and then polish it. As for the Flora Fountain, I am not sure anything can help, we only need a miracle. Now see the Bapu’s statue, black, with dried white coloured bird droppings. Yet, this government insists on constructing a Rs 100 crore worth statue in the middle of the sea. I am sure birds fly into the middle of sea too. If they can’t maintain one statue here, wonder what they’ll do in the middle of the sea. Besides, ofcourse they get an opportunity to fight with each other to try and show their right over the most loved King’s name and his history, Shivaji.