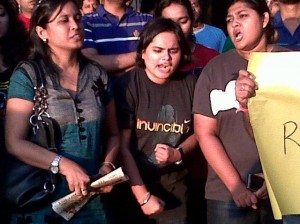 While we are protesting, many supporting, still many criticising, all of it points in one direction…tackling rape as a ‘social evil.’ While many wish to call it a mere criminal act, the fact is, rape emits from a certain mindset. An outlook towards sex and female gender. This is NOT academic argument, this is true.

While I do agree the angst and ire we are seeing on the streets of Delhi is all towards demanding better law and order, I do NOT think stricter laws will deter people from indulging in rape. Murder is a crime and people are aware killing can bring death sentence, yet murders take place. It is our socio-psychological make-up that needs to be changed.

It begins right in our homes. The attitude women themselves about girl child, the fact we are born to think we are vulnerable, we need help, we are ‘ardhangini.’ We are NOT whole…we always need another protective half…then begins the tough journey. We have been termed eons ago by a so-called wise man Manu..who wrote Manusmriti that the status of a woman as per the caste system after all elite castes, ‘Gai (cow), dhor (animal), shudra, woman.” The lowest in hierarchy…Yes, many may argue and say there exists no caste system, yeah sure…I believe.

It is all good to come out on the streets and protest. I do in fact like that finally the youth are on their own want to bring about change. Especially without a leader. It is a good time to tap the youth their itnelligence and talent. But it is time to keep emotions aside. Think for a minute, the so-called stringent penalties that are being demanded bobbiting, chemical castration-which shamelessly a leading newspaper of this country supports- death penalty, etc will it really STOP rapes? NO. rape is an act driven by the mental, social, psychological make-up of a person.

In most cases rape is the shameless display of false power of strength. To render the opposite person powerless, weak and struggling for self-respect. (I’m aware a man can rape another, however the % is far lesser to rape of women…). And do we really believe stringent law will help? Why do we seem to be scared to accept the reality and deal with it? Instead we still seem to be fascinated by the idea of ‘revolution’ which we have been flirting with since a year, thanks to Anna Hazare. The protests on the streets are definitely good, but the need of the hour is REAL change-a change in power dynamics, which is socio-political, cultural and our very own belief structure.

A mere amendment in law, making it stringent, chemical castration does NOT change power dynamics. Let’s get real. Changing dynamics means the decision to say no, the power to say NO. At this juncture I will want to bring in the issue of Marital rapes, which women who out there protesting may have also heard of…I won’t allege that they experience. It is rampant. The feeling of frustration may compel many to take to the streets, sure but are the victims of marital rape going to report them? Would they care to let their husbands go through the same ‘stringent’ eventuality that they want other so-called rapists to go through? Why this is distinction? Why this selective justice?

We are thoroughly hypocritical population. Let’s be honest. While in our personal lives we flout every social norm, rule, indulge in every act that should be put under scanner, we want others to toe-the-line. What we FEAR and loathe is the fact we are still patriarchal society and the ‘change’ we want we will have to personalise the change in our private lives. The law cannot change our thinking, way of behaviour. Rape too is NOT just a criminal act. We do NOT want that. We want to maintain the plurality in every walk of our life, that is why it is easy to demand so-called stringent laws. They will solve all our problems.

I’m not being cynical, so do NOT even remotely accuse me of it. It is the bigger picture which we are missing. Understand the kids are being brought with the same pathetic belief that women are vulnerable, why aren’t young boys and men vulnerable? I’m aware the percentage is far lesser, but that reality shouldn’t be eclipsed. The boys of today will believe all other forms of atrocities are social, except rape is ‘criminal,’ which needs to be dealt legally.

The anger I fear is directed to ourselves, dear countrymen and woman. We don’t want to change ourselves, but want others to. The same pattern was seen exactly a year ago when Anna went on this drive. Many renowned editors and journalists praise him for inspiring the current movement too-bringing people on the roads. While I appreciate there is NO leadership guiding them, (it is a very positive sign) hence the time to step back and think. What are we asking for? Why aren’t we willing to change from within ourselves? Why is an act that is so deep, intrusive is seen only as a criminal offence, which instead of being dealt with on a larger social level is to be solve by strict laws?

This too can lead to the road of fascism. The anger is deep-rooted. Most often when we ourselves are unable to deal with harsh realities. And nowhere do I remotely suggest that the offender should be allowed to go. I’m NOT hinting at easy law, my reading is right now all we seem to be obsessed with is ONLY this part. Because the real solution, to bring change from within is very tough and we don’t want the tough path, but it is time to break away from the usual easy path. Time to get real, address the issues head-on. Else once again an opportunity gone, where the youth can put their minds  together to see a different India, NOT the same in different forms…may be even worse. The change is us all and this is NOT what i want…