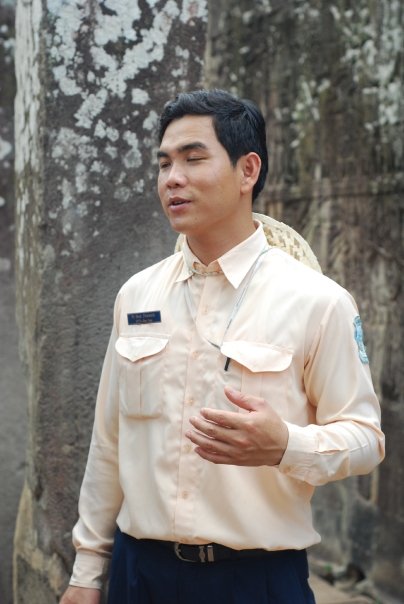 Thankfully Mr S’s eyes are closed. Here i would like to introduce our ever so nice & gentle tour guide. He is 20 something young lad, who has studied Khmer, English, little French & now wants to study Spanish.
Extremely versatile, enterprising…but imagine the situation he is in. He is among the 5000 tour guides at the World Heritage site – Angkor Vat. For many new readers this is the world’s first ever Brahma temple. In India the HIndus do NOT make idols of lord Brahma or construct his temples…he is creator of this universe so he is everywhere, i guess…
Angkor Vat is part of Cambodia. The country ravaged by war since eons…first war with Viet Nam, then they were French Colony. Then US carpet bombed Cambodia. By then Hindusim influence was seen at every level & the caste system too pervaded at every level. So the Brahmins became intellectuals & ONLY they studied & were permitted to study, while the lower castes were deprived. As a result, the Khmer Rouge leader Pol Pot, who studied the Frnech Revolution in France & majorly influenced by Mao returned to make revolution in Cambodia. He made everyone march to villages to toil as labourers, the rice they rew & harvested was bought by China for the arms they gave him…men were killed brutally, people were held captive. Women raped, then killed brutally. Children thrown on trees & killed. Ovewr 1.7 million died of both brutality, starvation & fear.
Mr S’s family are survivors. The family was separated like many. Since they survived they could give birth to Mr S. Today he has realised he needs to work to study. Interestingly, the govt of cambodia wc is a dual govt (Khmer supported by Vietnamese) & local have opened the country for investments.
So there is China -largest investor, others like Korea & other foreign invesors in different sectors. Heritage sies like Angkor Vat too have investors. Mainly Apsara company wc is Vietnamese. They charge $20 for full day, they have hired staff for security, guides. The Cambodian govt gives guide licence, uniform, rest is all in the hands of this company. The 2nd bigger company is Korean. They conduct the night tour wc is $15 for 2 hours ONLY.
Both these companies keep all the profits. They pay appallingly low salaries to the staff. Mr S said that they get ONLY few $ this is more than doctors who work in govt hospitals. SO you can imagine the levels of salaries. The guide told us that the company doesn’t provide any benefits like bonus, leave, medical aid, benefits, insurance or any such benefits to the staff.
The security is posted at nook & corner to check Photo IDs. They si on plastic chairs with NO shed or protection. The guides depend on tips given by tourists…often many are students or backpackers….
The guide told us they have an Union but they would rather be low key…they maintain low profile. Because few years before when some union leaders have spoken up, they were killed. Mr S said that the govt of Cambodia bumped them off. So they all rather keep quiet instead of fighting for their rights.
He said that Apsara also has hotles. Most of the 200 odd hotels in Siem Rep are owned by foreigners. They employ locals, but NO major benefits are given to them. I asked if the union of hotel employees & travel guides are combined or have dialogued & Mr S said NO. I suggested they begin informally some dialogue so that they can grow slowly in numbers. He was overwhelmed..we assured him that this is what we can do as peace felllows to give concrete suggestions to make their lives better…but he said they have to be careful.
The good part is I am proud being an Indian. Was always & after visiting angkor vat, im re-emphasising it. India is THE only country which has given money & funds for restoring this site & is reviving it..for its preservation…unlike the other foreign countries that are fleecing Angkor Vat….i hope Karin & I can start facebook online capmpaign to help guides like Mr S & help save Angkor Vat.