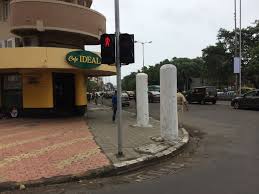 A lot is being reported on law, bail and the legal system of India especially after the hit-and-run case of Salman Khan. Mine is no chilling tale of h&r. However, I am a survivor. Moreover, after my accident, I have personally experienced what usually happens in such cases. Curious bystanders, many who watch for amusement, rare few true helping hands and lastly, but most important, those in your own vehicle who walk away from the scene of the accident, leaving others to suffer.

In 1995, I do not remember (moreover no longer care to remember) the exact date and month of the incident. I was a member of the crew shooting for a promo. We spent second half of the day at a bungalow in Juhu and wound up from there by night time. We left for Cuffe Parade and right behind my house, at Sukh Sagar we were suddenly hit in full force in the middle of the signal. This signal is exactly 5 minutes from my house and imagine till the time I shared this news with my parents, nobody had any clue. There were NO cellphones at that time. We were travelling in a Maruti 800, that belonged to cinematographer Sunil Mehta. He sat in the front seat with the driver, the director, another assistant director and me in the back seat. I had blacked out. I recall my name being called out my legs had become limp. I know now how it feels when we say ‘there was no more life left in one’s feet.’ I nearly tripped as i tried to walk, I was shaking and believe me I was angry that I let myself feel vulnerable. I shook myself and flew with rage to slap the driver and the police dissuaded me saying “Tumhi kayda tumchya hatat gheunaka tai, amhi ahot, amchyavar bharosa theva.” I must give it to DB Marg police and the traffic police. They pulled him out and crossed questioned him, i saw the fucking asshole’s eyes were blood shot red.

Now understand, this was in 1995, pre-internet, pre-cell phone or even pre-pager days. There was absolutely NO awareness regarding drunk driving, anti-speed laws, or a civic sense that even though we still lack on large scale basis, is being strongly felt. So we were left to fend for ourselves. There was 1 more car ahead of us, a Bohri family with an elderly man and his family-9 lives were at stake, at the mercy of this drunk man! There was NO remorse on his face. Our Maruti 800 had become nearly 1/4th its size, we smashed into the Bohri uncle’s car who too were shaken. There was chaos and while police cornered the drunk man, the director coolly held the hand of the more frail and shaken assistant director & said, “Let’s get the hell out of here.” May be I should have listened. As I walked few steps with them out of sheer disgust, I looked out for Sunil Mehta because it was his car we were travelling in.

There I saw him on the divider outside cafe ideal guiding the traffic and unaware that blood was streaming down the back of his skull. I walked back to Gupta kulfi, shaking with fear because Sunil had no clue of his condition. The kulfi man gave me handful of ice which i wrapped in my napkin and asked Sunil to hold on his skull and told him he was bleeding. From then on began our useless ordeal. I am glad Sunil agreed we should lodge a complaint at the DB Marg police station. We went to Lamington rd station and were there till midnight. All the 3 cars were towed to the police station while our statements were being recorded.

At that time we all sat around recounting the horror of that night. A production person prodded the director of how the day was a waste, shooting going bad and problems of continuity. Nonchalantly they turned to me and said I should never have got into filing this complaint. “We could have settled this matter and saved time and money of the company.” This was UTV, mind you, making profits. I don’t think any one of them to date realise or even have the sensibilities required. This was shocking to say the least. Here are potential parents and in many ways killers if all they think of is ‘settling matters with money.’

This all occurred within 5 minutes distance of my residence. The accident spot, the walking away cold heartedly, the DB Marg police station-every scene was in half kilometre radius. And nobody in my building or the lane was remotely aware of what had occurred. Worse still, here were educated colleagues and boss who lacked all sensitivity and respect to anybody else’s life. That was the first jolt. The cinematographer called me later and even assured me of support if I were to pursue the case, which I did. I still am not sure if my decision was sensible. I did what is right and what comes naturally to me -to abide by the law.

A few years after that, the matter came up on the board twice. Now this I am sure is still a followed practice. An absolutely unfriendly and indifferent, abrupt and I do think communication-challenged public pleader was ‘appointed’ to take up my matter. She NEVER interacted with me regarding this case. The matter would come up at Girgaum Court, which is a dingy, dark and depressing court to be honest. The public prosecutor behaved with me as if I was the accused. She refused to listen to me. And considering that I already had television news experience going to courts, I was confident of dealing with these lawyers.  But no, she deflated all my confidence. After a few months when the final hearing was on board, this lady refused to defend the matter the way I wanted. I seriously don’t know what she put up to the Judge. Sunil’s driver too was present and all I can say is we felt like total shit. The court declared the accused was from out of Mah. MP or some such state, (that asshole was present in court and looked far from guilty) so he was let away. The judge told him to pay rs 300. I shouted, “This is not fair, my life is not so cheap.” Yes i took the liberty and refused to care two hoots for what the court would think of me. The gall of the judge, who said, “Whatever you have to tell, go to your lawyer.” That cow was not even hired by me, she was NOT ‘My” lawyer. The all round challenged moronic cow snapped at me and asked me to shut up. I cried, NOT because of the judgement only. Because a potential remorseless killer was let free. Moreover out of helplessness, since I had NO powers to fight for myself, the driver and my colleague. Worse the freaking judicial system valued me worth only Rs 300/- DO you know how cheap that is? Even a sex worker in 1995 must have charged lots more than that.

Do you know how shit it feels? It had ramifications on me. I was dealing with multiple frustrations. I did not inform my parents of this accident for long, I was on medication for back ache, was scared in case of any internal injuries. Thankfully after a few weeks the pains stopped. Worse were the mental scars and the need to overcome any sort of fear. I am surprised I did not become an alcoholic or a mental case. I still cannot get over the fact that a court has valued our lives worthy of only Rs 300! This made me an angry woman, I know I often pull up rule offenders. People think I fight for no reason. But it is a matter of existence – do I walk away silently as I see it happen repeatedly? Not that the offenders listen, so why waste my time? I am learning, you can’t change others, one needs to change. And every day I pray I do NOT become an indifferent person..it is a daily battle every single day of my life.