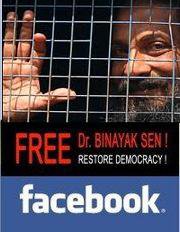 The medical practice is the only profession in our country (atleast i know India) that has to take an oath. The docs are not supposed to be profit oriented and more so, since diligent tax payers like me file returns & pay taxes, their medical education is highly subsidised. So they are supposed to take an oath of serving 1 yr in rural villages & be committed to public. That is the main reason for subsidisation of this otherwise expensive studies.

One such diligent medical professional & gold medallist is the man in the picture above. Dr Binayak Sen. Who has a wife, Ilina & 2 daughters. Today the family is scattered thanks to Govt of Jharkhand, GOI & High Court that has ordered him to life imprisonment.

Dr Sen went on to Chattisgarh which was once part of Bihar before. Sen dedicated his life to the poor, mostly those who can’t afford to eat even rice twice a day, forget 3 times. And they are totally deprived from absolute basics like food, opportunity to earn living, basic education & will to survive. Most of us will never be able to identify with that. So let’s be honest about this fact.

Sen gives them medication, helps them to live, ensures the women don’t die while pregnant, at the time of delivery, lack of nutrition,  don’t die after delivery due to lack of iron or blood. He ensures the children in that region don’t die due to malnutrition & starvation. This i am sure is of most significance. He also treats them for diarrhoea, cholera, malaria & they get medicines free of cost.

People in cities may never know the importance of these things. It is so vital to have healthy, normal citizens who are not a burden on our economy. Ill, disabled deprived population adds burden to the economy, Which the governments should be reducing, but play politics with it. This most valuable difference is so vital. Even more when we realise he’s made a difference in an area where govt has never bothered to reach or never will.

In the interim period. The Communist Party of India (Maoist) reached in these remote, tribal areas of India. The cadre & workers mostly educated, rich, who left their comforts & warm environments came to dedicate their lives to the betterment of these poor tribals. Well they never will get medals for sure. Yet someone was acknowledging them, someone valued & cared for them. The fact that the tribals would never forget. Soon many felt frustrated, the lack of governmental intervention has its limits too. The cadre also began feeling it. They realised things & systems are not changing & soon we saw the rise of extreme Maoist, Naxal activities of their cadres resorting to violence.

Killings took place -till now mostly of the officials, administration of those who were key players of our corrupt systems. Till then most felt, “Its ok, the govt calls for trouble if they don’t change & get to the grassroots.” the govt never has done it & will never do. So then anger, frustration drove many to guerilla war fare. The naxals began attacking civilians. However the tribals never diminished their support to the naxals. For the reason that they survived indifferent death.

Dr Sen meanwhile dedicated his life to serving these poor tribals. His wife & children lived in Wardha & would frequently visit him in Raipur too. their lives took a change for sudden. Dr Sen was arrested. The last 7 years he is fighting all sorts of charges put on him forcibly, for which there is NO evidence at all.

OK, tell me when you go to visit your personal doctor how do you like your dr to be? Detached, Impersonal, straight up, come to the point Ms/Mrs/Mr so & so. Or at least i like my dr to smile, laugh, relax, be warm welcoming & i want to tell him something personal -my illness.

May be its an Indian trait or what i don’t know, we don’t stop here. We patients know about the doc’s life, more so he knows lots more about ours. We feel nice if our doc enquired about our spouse, gf/bf, children, their progress, our personal problems, etc. The usual appointments of docs go on for a while.

We tend to consult the doc see him as a guide & in a country like India, Doc is equated with GOD. Whoever, whatever there may be. Many of us want our parents or kids to listen, follow certain course of medication, diet we ask our doc to do so. We request him to have a talk with our family members, because we are confident they will listen to the doc. Its understood. The doc doesn’t simply ‘passes on our message’ goes beyond & convinces the individual. So we want the doc to be our advisor, counsellor or communicator, to get some work done.

Imagine this situation a tribal area. It’s far more intensified. The families who may know nothing about medication, treatments & illness in the first place. Besides imagine the activists who lived here, leaving behind their families in cities while they lived in remotest corners. Now take this further. Some of these got arrested. Not all have worked in arms training or imparted arms training or even picked up arms. Some really went there to teach -educate the children/adults.

The informal non-religious, non-formal and absolute socialist form of education. So what. At least they informed poor, illiterate tribals of their rights, schemes, funds available that they can use. As a result, many who got arrested and have been sent on rotation from 1 jail to another do have families. Some have multiple families. Some have really tiny kids. In fact one alleged Naxal saw his kid last when he was just born! They feel lonely. They too are human concenred of their families & more so the academic progress of their kids. They are given crap food, with worms, stones, etc. Most have been beaten. You can make out after their releases interim ones though.

These Dr Sen types have been languishing in jail for like 7 years plus. So while they are in jail they also would to reassure their wife, kids, daughters especially how to cope with these circumstances. They want to tell their children to not fall for loose talk, taunts NOT to get emotionally vulnerable. Also words of caution, ask them to be careful.

This is NORMAL. I’d have done or communicated lot more. Remember the arrested naxals are denied all rights. NOT even allowed to write letters to their families. What if they have sent encoded messages you know!

So the Chattisgarh govt of BJP stepped up its anti-naxal activities. & while they wanted to arrest the violent Naxals, whom they couldn’t zero down upon, they simply arrested Dr Sen. He got bail after 7 years and trial began. Unfortunately during the trial most media IGNORED the issue. in this interim period i happened to write a piece on children of few naxal leaders. I spoke to Pranhita.

“When rumours of Binayak’s Sen’s arrest were doing the rounds in Raipur, where he lived and worked, his family was on edge. Pranhita was at the time studying in a college in Kharnagar, a few hours from Raipur. Her life changed after Sen was arrested on May 14, 2007. She started getting threats.  Leaflets would be slipped under my door, saying ‘they’ knew I lived alone she says. I am now scared to talk to people. Even when you messaged me for this interview, I felt nervous. Free Binayak Sen campaign, and is the cinematographer for a documentary the People’s Union for Civil Liberties is making on the case. Working for the campaign has also helped Pranhita appreciate her father’s work. ” At the same time, she says she holds no grudge against the neighbours who shut their doors and windows when a posse of nearly a hundred policemen arrived to take her father away. “They called my father a terrorist and shut us out. But calling him names does not make it true.”

The daughter & other children have to live with these tags like “terrorists”. The Chattisgarh court has charged Dr Sen with ‘sedition;’ The definition – “actions or speech urging rebellion against the authority of a state  or ruler.” So to treat the poor, live among them. To pass on messages if the cops are to be believed, is this a crime? More over to prevent illnesses, death of women & premature babies, immunise them is going against the country.

Do we not always communicate, send messages to one another? what’s social networking i wonder? Now if Dr sen has sent messages of these arrested in Jail to their family members, it becomes sedition? This is maths gone wrong. Bcoz the police aren’t doing thorough investigations, they have failed to catch real culprits. They can’t put an end to Moaism so they catch the person doing some good work there. Sure some good work this is.

Instead of calling for other NGOs, calling CPI (M) cadre to talk, taking schemes to the poor in those remote areas, ensuring even if there’s 1 child he gets to study, instead the govts send para military troops, naxal combat teams to finish the activists, people? the real problems remain unsolved.

But the truth is those who know less about the movement, about Maoism, Communism in this country, will draw their own conclusions. Worse still, since most do not have family doctors who take the extra effort, charging pittance & helps to prevent disease, we will never believe Dr Sen is only pracitising medicine. Dr Sen has at no time propounded, promoted or supported violence & killing in the name of maosim. To call him naxal in itself is wrong. Actually they are driving nice people towards it. Worse still they’ve called Dr Sen as terrorist? Who exactly has given us the right to call this med doc such names?

People also say, “what’s the truth, he was a naxal na?” He helped the naxals, maoists, so he is anti-national . On what basis are these allegations being made? Read what i’ve written. Ask ourselves the basic questions we have read. Draw your conclusions based on it. Else find a better family doctor yourselves.