Everytime a rape occurs and the accused is a rich, elite man I get goose bumps & really don’t wish to read the newspapers. Yes, despite the fact that I work for a newspaper.

The reason being simple, I & the rest of millions of readers are forced to read utter crap like how innocent the accused – most often safely addressed as ‘alleged’ accused.

The latest being India’s actor SHiney Ahuja is now serving a jail term, deservingly. The day the information of his heinous act occurred the first reaction of most middle class elite Indians was of shock & disbelief. Why? Because the victim was a domestic worker, cleaner at his house. He had asked her to bring a glass of water, when she did, he locked the door, grabbed her & finished his act of unleashing violence on her.

The young girl a minor couldn’t get out of the house and her friend another domestic worker brought her out of the house. She ofcorz looked dishevelled, trembling with fear. But was the average Indian’s reaction “Oh! Poor Shiney, this one is a gold digger.” “He couldn’t find anyone else? How low could he stoop to rape a domestic worker,” “She must have lured him, see now his innocence will be proved.” Worse things were said of that poor child.

Years ago a sex worker was summoned forcibly into a car of an abso doped, insolent brash drunk driving son of an industrialist. She was raped. So the general India was appalled. “How can anyone rape a sex worker?” “She must’ve only done something to attract this poor boy,” etc etc..blah blah…utter rubbish was published in innumerable reams of expensive newsprint paper.

What I don’t understand is how news reporters of my clan presume the man is always innocent? That the rich can never do any harm, that how the victim is always guilty, while the accused ain’t one till proven so?? There are NO written or otherwise rules that say who is guilty or not….however we continue to presume wrongly.

I shudder to think how reporters agree to go the immediate relatives, family members and neighbours of the accused who ALWAYS say: “We have seen playing with our children, he is so nice, warm, caring, he is very polite. He doesn’t ‘look’ like a rapist!!” who is a rapist? Who looks like a rapist? Can anyone tell what is a profile of a rapist? Is there any rule book, police act or law that says how a rapist looks like, which caste, class, income group? What are their personality defects? Is he clean shavem bearded? Is he from lower, higher caste, class? I mean what are we saying every time a young rookie or more so a wanna be investigative journalist goes & does a reaction based in-put of ‘How neighbours of the alleged accused say he is innocent!’ Absolutely insane things are allowed to be published.

I want to know does anyone know there may be a sexual assaulter sitting rt here next to us? May be within the family, in the neighbourhood. Some are brazen, others not so open, these are predators and get away always because there is a hidden sanction from the rest of the society a bloody license given to someone to be free when he should be sitting behind bars for the rest of his life. Often the people around run to the rescue of the predators who then get escape routes like in Shiney’s case. He had on his side India’s leading film diretor Mahesh Bhatt who promptly said it was ‘consensual sex.’

The another important that worked in the victim’s favour is that she was promptly taken by her friend’s employer to the police. The police in turn sharpened their claws and took her immediately for medical tests. Before the semen could get dissolved or washed in crores of rupees of bribes or hidden in dirty cupboards in form of suppressed police files. The case has all the formula of a Bollywood movie…sadly at the cost of one innocent life – whose innocence is forever lost.

However our faith in a poor, vulnerable girl/woman being innocent has been lost since long…we simply do not faith in ourselves, sadly even women suspect such victims, what makes it worse is that it includes young, up-coming girl journalists! 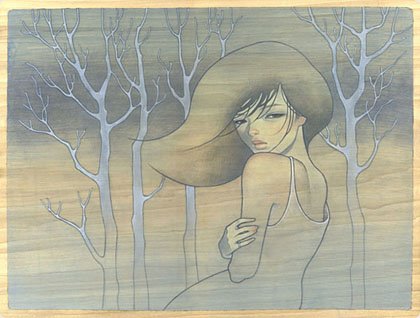 A girl
She suffered in silence
She held herself guilty
What had she done to attract this crime on herself?
She was a young girl, he an uncle

She didn’t want to be a martyr, but she bid time
Her confidence had given her more power
Many looked upon her with awe
By then she had blocked out the past

The silence was eerie for them, the girl was serene
The dogs barked in the passage
Finally the uncle spoke on deaf ears

Yet again a girl has been raped in the so-called ‘safe’ city, Bombay, alias Mumbai! Guess if some incident occurs frequently it means a few things. Firstly, there is something drastically lacking in the very systems & structures – here its primarily secuirty, law & order; more so self-control & respect for a girls / women. It also means the safety of women in the city has fallen down drastically. The secuirty i mean the whole city. Who is secure? Can anyone of us claim to be? I really don’t think so.

It also means that there is some sort of sanction or sniggering approval for such violent acts. Because so many are silent & tight lipped when such incidents occur. Somehow the hypocrisy of the Indian society gets thoroughly exposed. Yes, because the men folk can roam around late at night, they can be arrogant, forceful & flaunt their sexuality. But if women even remotely show similar attitude, they are termed as ‘fast’ women who deserve the consequences. The very faith they have in the system is destroyed, rather crushed to bits…

Last week an American Indian student from a social sciences college went out with her female friend for drinks. The whole episode till here & thereafter has many a loophole. Was there any breach of trust between these two? Why did this girl go out with ‘friends’ of her female friends. so on so forth is now coming out. I have a question. Do we not trust our own friends? Do we distruct every person we meet? I travel alone, i interact with people and its interesting what one can see around. I don’t drink with strangers except close friends, this is a rule. On tour or travel i restrict myself to only a glass of beer. Plus a BIG lesson, NO mixing drinks…However this has been soemthing i have been able to stick with come what may. Sometimes like in this case of Ms R things didn’t go her way.

But as if this wasn’t enough. She had the courage to go to her hostel officials & tell them. They went to the hospital, police station, underwent all tests, etc. She filed a ‘First Information Report.’ Now this is supposed to be CONFIDENTIAL. Interestingly, the media in India has become very ‘investigative.’ The editors more pushy. so according to what my colleagues told me many news organisations & people had been given by the police the copies of the FIR.

The FIR is a real weapon for the victim. That is also confidential a document. Also if a journalist gets the copy of an FIR, one is NOT supposed to reporduce it verbatim. Here we had an over-excited tabloid newspaper male reporter who went ahead & published all details. Every action that the poor child could remember was described like a D grade sex film! Readers were subjected to the Gory details…instead of publishing the excerpts from this FIR, the whole darn paper was reproduced.

It was the most disgusting & repulsive piece of journalism i have read or seen in modern times. I sincerely believe such journalists should be castrated or flogged…Not for once did the bloody editor of this tabloid stop to think she is a woman & how she is encroaching upon a vulnerable, already shattered girl’s privacy. Every word was published as if the reporter & the editor had relished & enjoyed every word that was printed on their paper. It nauseated some of us.

I did write to the network for working women journalists, asking us to file a suit against this third rate paper & its editor, especially since she was a woman. Pathetic is the situation in India i feel. To what extent will journalists go to get a story. In Our paper the bosses acutally pulled up the crime team for ‘missing’ out on this story. I want to ask do editors forget they too are humans. We all have women in our households. Would we allow something to be written abt any woman or girl we know in our private life? We owuld mover every stone on the way to protect that girl’s relative’s identity.

Why then do we not follow the same rule? Why do we not do things we’d expect others to follow? The paper failed in its very commitment to send the message of the incident to the masses, or readers. Instead it tantillised the readers, it made them curious and more so it perpetuated false perceptions of girls & women. This piece of tabloid journalism actually made people talk ill about the victim. Except for her name they had gone to town with every detail that the honest victim had recorded with the police.

It definitely brings us to the roles of ; living & suffering in a patriarchial society. The boys are being made out to be ‘poor’ boys, ‘misled inccocents’ “who did not rape but only gave the apartment to rapists.” Even to know a rapist is a scary thought. How can men go beyond to help him. It is scary…The police first need to go inside the jail. Plus write ups about them need to come out more openly. The editor got her due. The women’s organisations from the city went to that newspaper’s office & they actually lodged an FIR with the azad maidan police.

We all suppoted this protest. I do hope this makes the editors, journalists realise the true meaning of ‘confidentiality & it breach.’ i only hope people use the same parametres for others that they will like to use for themselves.