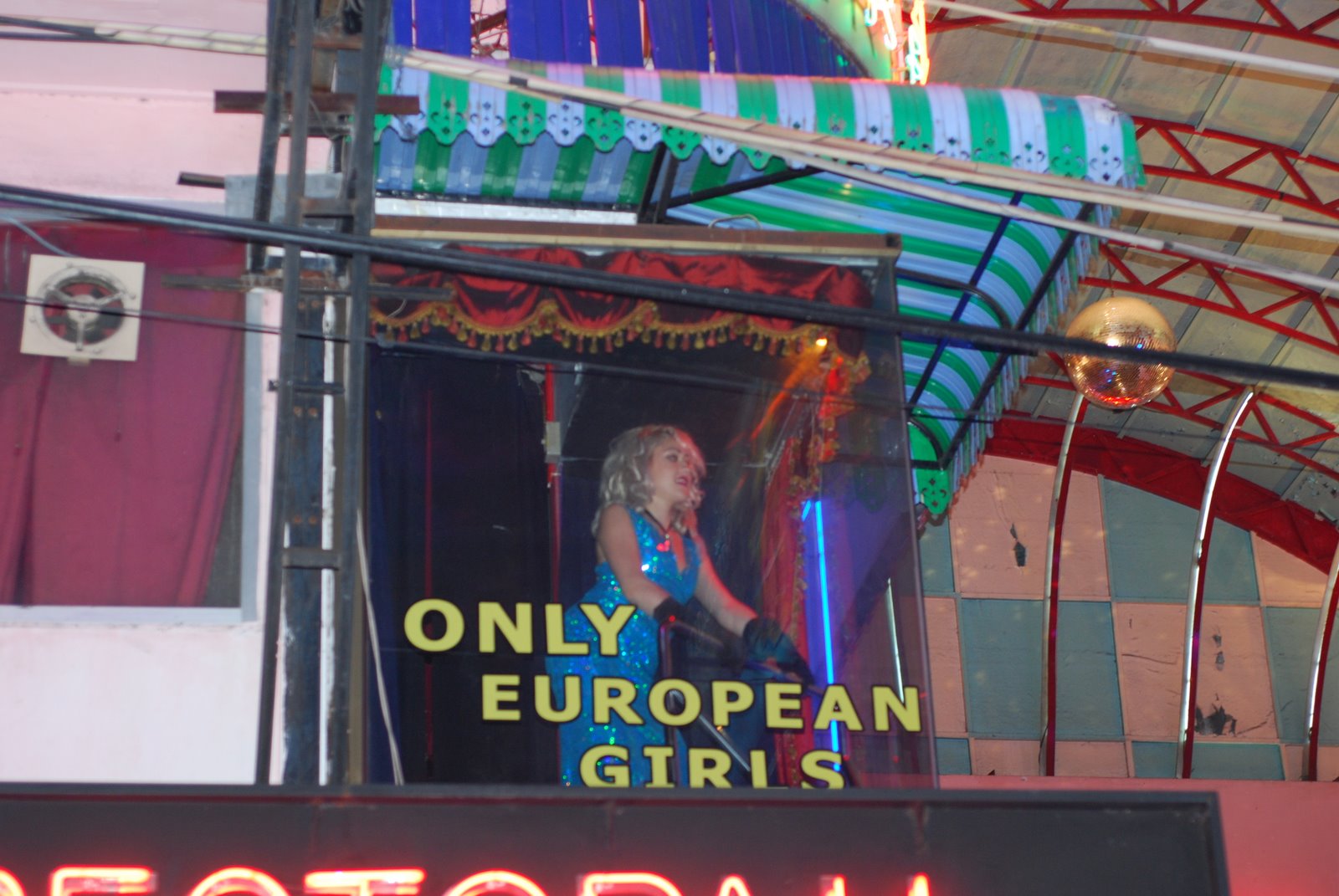 I think this picture is self-explanatory! “Only European girls??” Should have been Russian countries actually..that snide remark apart. This is for my learned readers & friends a part of ‘Walking street” as it is called in Phathaya or Pattaya.

Now for some Mumbai’s Girgaonkar like me, we’d grown up listening to Pattaya where the nuveau rich couples went to for a honeymoon, or more so for a shopping experience. What they don’t tell you & teach you is the harsh reality – this is THE place for cheap sex & flesh trade of the sleaziest kind.

Most of these girls or women are NOT real women or girls. They as called, “Lady Boys.” Men mostly in all kinds of fakes – eye lashes to face wc is all facelifts, plastic, boobs that are silicon & it just gets gross by the organ. Sad part is that these women (I’d rather call them so) begin to solicit ‘customers’ as early as 4.00pm! It is simply pathetic to see the extent to which they are compelled to go. Oh! Yes, i do have sympathy for them & aware a lot of this is forced upon them. Because when we up north & spoke to the hill people, they live in abject poverty. They are told to sell their daughters for a premium so that she will look beautiful & do well, have a fab life & send home money.

It is us educated modern who know things like poverty, borders, flesh trade, illicit trade, sex workers etc…The women are made to do things that are simply unimaginable. to what extent the men & women who trade these nymph girls can go to is simply left to imagination. Once You’re in Pattaya it’s a welcome to sexland. You’re welcomed with a basket of the ‘basics!’ There is a basket full of alcohol bottles, medicine & thankfully condoms. yes by the way strawberry flavoured if you pl! Now i give it to the hotel owners. They seem to be THE only ones who openly accept that is sex part of their lifestyle in this city & at least are promoting safe sex, I really appreciate that.

Interestingly we were 4 women besides a couple – Dilshad & Susanne who had come wt their toddler daughter Yasna. by the way it was her first ever exprience at sea, she is only 2 yrs old. We women sofia, chiara, wendy & myself got over the first shock of the condoms part (Yes I’m a little prude you see), after dinner we walked along the so-called beach. I mean there was No beach, it was only a series of lamp posts!! Well for the modern ones who have NO idea of this saying, “Standing under the lampost” a sex worker stands to solicit a customer…so as i’ve described the whole beach shore stretched over few kilometres was lined along with palm trees, these & plenty of other women making out. If some of them opened their mouths it was a total give away! Husky manly voices talking to one another. Indulging in all forms of sex.

While we 4 women walked (Scott had decided to join us later after a kids kick boxing match, yeah more on it in a while). Believe me this is THE most safe place on earth for a girl/woman! Yes, we are NOT the targets, nobody is interested in us. It is revenge for us women..really the men are the targets. Seriously speaking, the men are under immense pressure in this place. I feel bad for those who come with their families & wives..well seeing is believing. Oh! Yes, you will be surprised the number of American families that were walking down that street…in fact while wendy & i walked we saw an Arab family walk past & a man showed these girls to his son (potential customer in the future? who knows), the mother however threw a dirty glance at her husband & warned him not to teach their son such stuff. While other American families walked hand in hand standing to stare at these scenes.

The street has thousands of these women. The sad part is that there are many cops, police officers & volunteers,surprisingly a lot of them whites…yet, NO one bothered. They are like the Indian cops, turned a blind eye to all these happenings. Reminded me of the dancing bars. I can recollect vividly how these lil nymphets, girls forcibly brought from Bangladesh, poverty stricken parts of Bihar & West bengal who were sold here to women & pimps in Bombay. they would be taken to dance bars, which were sponsored by the underworld, some by the police & few by journalists who were close to either the cops or the gangsters.

The girls would dance tantallising the men wt all their evocative steps & actions to famous Bollywood numbers in pitch dark bars, where forget one’s food or drink couldn’t see anyone’s faces either. Everything under the skies would unfold in those dark moments…& the sickest part was that the men would throw money at these girls…who smiled & picked it up. Later it was sex.

Here too i saw the same. Except the dance bar girls were real, here these poor transvestites – put through sleaze & i am sure they too must be going thru’ immense suffering to be treated so cheap. I had heard of all this…What i wasn’t prepared for is that abso Bulldozer men of my father’s gen or even older, squeezing girls of their grand daughters age. Pl kindly see the humangous sizes of these ugly men who have left their wives, spouses or gf’s back home for young thai girls!! In fact on one boat ride one of the girls (they ar eall trained to fondle men & arouse them, carass them even in public) kept fondling the bulldozer & that bare chested man’s thighs! Interestingly, Chiara & i could see it on a blue screen window! yeah so true a full fledged live blue film unfolded in front of our eyes…the man actually had the balls to proudly show off his wedding ring to this lil girl! In other corner of the boat an uglier looking thai lady was biting the shoulder of another sleazy looking old man & he had given her a thick gold chain. Well these aren’t judgements im making about the girls or men, these are facts after speaking to couple of people.

The girls obviously haven’t the dime to eat such grand meals like steaks or fillets. They get free hotel stay, travel, good clothes, branded accessories & clothes, gifts & ofcourse sex, sex & more sex, with parting shot, money. So i am sure its ok in the eyes of many…but soooo scary, many are regulars coming here repeatedly. They exchange pleasantaries at breakfast, some fight with the girls, beat them, some may have even exchanged these partners over time, who knows…their girls friends, wives or spouses must be thinking their husbands or male partners are good businessmen!

One thought on “The sleaze street of Pattaya”